This morning I joined fellow members of the Board of Advisors for Preservation North Carolina for an annual meeting at the Yancey House Restaurant.

Paul joined me. We'd never been into Yanceyville, though we'd skirted the edges many times going back and forth to Charlottesville. Bartlett Yancey built the house in 1806-14. A Greek Revival addition was done in 1856, and later in the 19th century it was gussied up with Victorian touches.

I'd heard of Thomas Day, the free black woodworker, for years, but this was the first time I'd ever seen any of his work. He created each of the curved stair rails out of one piece of wood! This staircase is in the Greek Revival portion of the house, the grand front entrance--built after Yancey's untimely death in 1828. 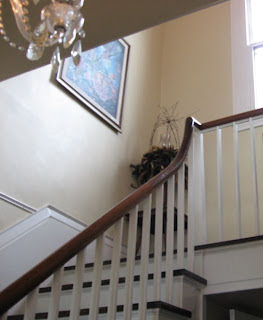 Yancey studied law with Archibald Murphey of Hillsborough c. 1807. According to one source, "Yancey possessed a rare personal magnetism, and that combined with his great legal skill, common sense, and powers of persuasion within a short time made him one of the most successful lawyers in the state. Soon he was able to pay off his debts and build a fine home, where he dispensed a generous hospitality. In 1813 he decisively defeated his former teacher, Archibald D. Murphey, in a race for Congress, receiving all but three of the votes cast in Caswell County. Elected as a Republican and a War Hawk, Yancey took his seat on 3 June 1813 and shortly became one of the House's leading members." He was later in the North Carolina Senate, where he served as Speaker.

I wonder what he or Thomas Day would think of the house now, in its purple glory. Its owners, Mike and Lucindy Willis, insist that it is not purple, it is Nashville gray, and that the roof is the authentic color of poke berries. I believe them that the colors are authentically Victorian. But I think what they're more after is the effect that they get: people slow down, turn around, and come back to take a second look.