This morning I'm headed to Atlanta for Solutions 2013, the National Housing Conference on State and Local Housing Policy. Some great North Carolina connections here: Chris Estes, president and CEO, came to the position a year ago from the North Carolina Housing Coalition, where he was executive director. He's well known to many of us working on affordable housing regionally. And one of the keynote speakers is Jonathan Reckford, CEO of Habitat for Humanity. He's another Tar Heel with local roots: he's the brother of Joe Reckford of Chapel Hill, and their father is Kenneth Reckford, professor emeritus of classics at UNC. Looking forward to connecting with them and many others and learning a lot. 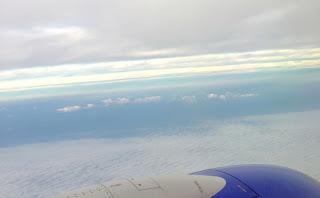 "None of the above": The school-to-prison pipeline and the new Jim Crow. 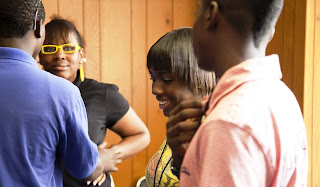 "None of the Above," the latest production from Hidden Voices, is a truly riveting critique of one of the most troubling trends of our time: the systematic bias against children of color in school disciplinary procedures, under the guise of objective "zero tolerance" policies. Under these policies, something as innocent as bringing a Midol to class for a friend could well be the trigger of a suspension, then an appearance in court--and so the school-to-prison pipeline begins.

You can read much more about this devastating phenomenon from such sources as the ACLU and the Southern Poverty Law Center. But if you haven't seen the Hidden Voices production, you're missing the human dimension to all of the statistics.

Written by Lynden Harris and directed by Kathryn Williams, the 40-page script was distilled from hundreds of pages of workshop recordings produced over a period of thee years. The performance is in the format of a radio call-in show. Moderator "Ernest Justice" (Philip Smith) deftly manages a conversation with student activists, a defense attorney, a Teach for America teacher, one very outspoken student, other teachers, a restorative justice worker, and other well-intentioned folks as well as call-in listeners, not all of whom are so sympathetic. By the time the evening is over, it is hard not to feel a little numb, and not a little powerless to change such overwhelming structural forces.

And yet doing nothing is the last thing that Hidden Voices intends to accept. "Do one thing," says the program copy, listing two pages of possibilities. A few of them:

Join the Raise the Age movement. North Carolina is one of only two states that charge children for crimes as if they were adults.

Get involved in the Restorative Justice movement. Help give juvenile offenders and their victims an opportunity to address the harms caused productively.

Talk to someone about what's happening in the schools. Reach out. Listen.

If you missed it, there are a few other chances: next weekend at the UNC Stone Center, and Oct. 5 on the Duke campus.

For me, "None of the Above" raises an opportunity to mention a book that fundamentally changed my understanding of our world--sometimes it's not an exaggeration to say that about a book. Michele Alexander's The New Jim Crow: Mass Incarceration in the Age of Colorblindness opened my eyes to terrible racial injustices in the criminal justice system that extend all the way from discipline in the school room to the administration of the death penalty.

Our "color-blind" laws are of little help--in fact they become rather confounding--when we grapple with the Trayvon Martin murder, for example. Last Thursday night, the Town's Justice in Action Committee hosted a panel discussion on "Lessons Learned from the Trayvon Martin case." The room was packed. Our police chief, Chris Blue, explained the procedures he has in place that ask his officers to self-check against racial profiling. Let's hope it's working.

And let's keep talking.
Posted by Sally at 9:24 AM No comments:

Fired up and ready to go.

When the filing period opens at noon tomorrow, I will be in Hillsborough to file for election to the Chapel Hill Town Council.

Today, I'll be at the Eno River to join the 34th annual celebration of the Festival for the Eno.

Yesterday, spurred by events on the Senate floor on Tuesday night, I joined hundreds of others in witness to and peaceful protest of the Senate's passage of a bill that places unconstitutional restrictions on the right to safe and legal abortion in this state. This bill was rushed through the Senate without public notice, without time for deliberation, and in fact it had come from the House in the form of a bill that would outlaw the recognition of "foreign" (Sharia) law (as if the United States Constitution did not fully require that the laws of the United States be only the laws of the United States). Though we doubted we would change the outcome of the vote after the third reading yesterday morning--just as the Moral Monday protests do not measure their success by immediate outcomes--it was important be there.

Serving in municipal government rarely involves such monumental questions of fundamental constitutional rights. Local elected officials do not have the power to say yes or no to abortion regulations or Medicaid money or unemployment payments or whether to rewrite the tax laws or to allow private school vouchers. In some ways, our charge can be read narrowly: We make decisions concerning public safety, land use, and other issues fundamental to the health and welfare of our local community. But all levels of government are interrelated. And local government is up close and personal: it's where we come together to make decisions that reflect values we hold dear. We know that our values can resonate upward and outward as well.

It was a privilege to serve for two terms on the Council, from 2003 to 2011, and since my appointment in January I have been honored to step back into the good work of the Council on such important issues seeing our expanded Public Library off to a strong start, focusing attention on new ways of supporting affordable rental housing, and continuing to serve those in our community who are homeless or at risk of losing their homes. As we pursue implementation of the Chapel Hill 2020 Comprehensive Plan, I've been responsive to community members who are devoting much time and energy into discussions of the Central West planning area and the potential development of Obey Creek.

I'm proud that our work on what used to be called Lot 5 has come to fruition in the beautiful 140 West Franklin development and the associated public plaza, and I'm excited about the conversations for the future of the Rosemary Street corridor. This is an exciting time for downtown Chapel Hill, and these discussions are bringing out the best in our residents' creativity.

I look forward to the campaign, and to talking with each of you along the way about the issues that are important to you.
Posted by Sally at 10:29 AM No comments: