Traces of the Trade, on P.O.V. This Tuesday

I've been buried in work on University, Court, and Slave (though you couldn't tell it from how little progress I made last week), so I'm a little behind the curve on this most exciting news. The much-discussed documentary Traces of the Trade will be broadcast on television for the first time this Tuesday, June 24, on the PBS show P.O.V. (In Chapel Hill, POV's broadcast of the film will be on Friday the 27th.) Traces of the Trade is about James DeWolf of Bristol, Rhode Island (one of our country's wealthiest men and a leading figure in the slave trade in the eighteenth century) and a journey that DeWolf's descendants made recently as they retraced the paths of his trade routes and property holdings. They began in Bristol, then went to Ghana and the Caribbean.

I saw a director's cut of this back in 2005 at a conference at Brown University. It was fantastic--absolutely fantastic. I can't wait to see the final version. You need to see this. Trust me on this one.

This evening's Bill Moyer's Journal has a short preview, which you can watch here. Also, Sally tells me that the director, Katrina Browne, will be speaking in Chapel Hill on September 6. You may also be interested in c-span's broadcast with Thomas DeWolf, who's the author of a book on this subject, Inheriting the Trade.
Posted by Alfred Brophy at 5:06 PM No comments: 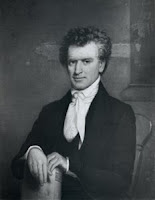 Well, it's a Friday afternoon in June and though my favorite librarian recently told me I should be relaxing now that I'm moved into Chapel Hill, I'm sweating out a paper for a colloquium next week. It's going to be about University, Court, and Slave. I'm trying to get the introduction written so I can distribute it on Monday. But instead of doing that, I'm blogging about a piece of it....

One of the chapters is on Thomas Ruffin, so I thought I'd post a note about an article that I forthcoming in the North Carolina Law Review (thanks to Sally and Eric Muller's kindness) on Mr. Justice Ruffin. The article was part of Sally and Eric's conference last fall on The Perils of Public Homage. Chapel Hill residents may find this of particular interest because there's a dormitory on campus named (in part) after him. (It's Ruffin Hall and it's also named for his son.) Anyway, the paper is about two things. First, it's about Ruffin's jurisprudence; second, it's about what we make of the fact that there's a building named after him. The payoff on the later point is that I'm not at all sure the building was named for him because he was a proslavery jurist--in fact, I think that by the early twentieth century that piece of his jurisprudence may have been largely forgotten. And so now, somewhat oddly, the building serves as an occasion to talk about the era of slavery and what that meant to our state and our university. 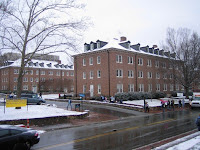 "Thomas Ruffin: Of Moral Philosophy and Monuments " returns to Justice Thomas Ruffin s opinions, particularly on slavery, to excavate his jurisprudence and to try to assess what Ruffin s legacy means for us today. It begins with an exploration of Ruffin s 1830 opinion in State v. Mann, where he self-consciously separated his feelings from his legal opinion to release a man who abused a slave from criminal liability. Anti-slavery activists frequently wrote about Mann, because of its brutal honesty about the harsh nature of slavery. After discussing Harriet Beecher Stowe s fictional account of Ruffin and Mann in Dred: A Tale of the Great Dismal Swamp, which further developed the theme of separation of law and morals, the paper turns to some of Ruffin s other opinions. It looks to slavery opinions including Heathcock v. Pennington (which released a renter of a slave from liability for his death in a coal mine) and Green v. Lane (which dealt with a trust to give quasi-freedom to slaves), as well as non-slavery cases like Scroggins v. Scroggins (which argued against granting judicial divorces because that would encourage more of them).

Ruffin s jurisprudence took the world as it was, or as he phrased it, looked to the nature of things. His judicial opinions the monuments he left to us illustrate a world of proslavery moral philosophy. That thought separated humanity from law and then decided cases based on precedent and considerations of utility to society. Ruffin was a great expositor of the system of slavery, as well as a great wielder of what Stowe called cold legal logic.

What should we make of this legacy today? Perhaps Ruffin aided the cause of antislavery through his honesty in State v. Mann. And, thus, perhaps we should honor him for that. Moreover, perhaps the honor he received in the early twentieth century (when a dormitory was named in part for him on the UNC campus) derives from his facility with legal reasoning outside of the slavery context. However, honoring him also runs the risk of honoring proslavery values. Conversely, removing his name from a building now runs the risk of concealing the prevalence of proslavery thought in the nineteenth century. That is, removing a name might facilitate a process of forgetting when universities should be trying to provide a proper context for viewing our past.

The paper's available on the social science research network.
Posted by Alfred Brophy at 2:07 PM No comments:

So I'm back from Philadelphia, where I went to see my dad for father's day. What a pleasure being within driving distance of Philly--this is the first time since I was in practice, lo' those many years ago, that I've been able to get home for the weekend. I hope to make a habit of this. On the way up there on Friday I had lunch in my old stomping ground of Richmond; drove a little around downtown and I hardly recognized it. There are new, tall buildings where there used to be parking lots. Last time I was in Richmond (in 2000) I enjoyed the restored Tredegar iron works. They're done a great job with it. My, things change over the course of nearly 20 years.

Anyway, as I was returning my rental car this morning, I asked the folks at Enterprise to give me a lift up to school--and a nice man next to me said, actually, I'm driving up Franklin Street. So I accepted his offer and to my good fortune it turned out that the man offering the lift is John Shelton Reed--whose works I've been reading for a while. What an unexpected pleasure! I didn't ask him what he thought of Dreamland Barbeque--but I will.
Posted by Alfred Brophy at 9:18 AM No comments:

One good thing about moving

... is coming across books that I haven't handled in a really long time and enjoying them again. There are the books I love that I return to time and again, like Rhys Isaac's Transformation of Virginia and David Davis' Problem of Slavery in Western Culture; and I carried with me two books that I particularly love--Angela Miller's Empire of the Eye and Michael O'Brien's Conjectures of Order. But then there are the books that I haven't opened in a while, which really repay reading again--like Mark Steiner's An Honest Calling: Lincoln as Lawyer and Edmund Morgan's American Slavery--American Freedom and Stamp Act Crisis (what a beautifully, beautifully written book).

And while I'm talking about beautifully written and important books: when I arrived in my office on Wednesday I was pleasantly surprised to see the advance sheets of Mary Dudziak's Exporting American Dreams: Thurgood Marshall's African Journey. Now, I'm really partial to books with Dream in the title--particularly if they're about race. Mary's book has a great first paragraph (I'm partial to first lines and here):


It was January 1960, but it was summer. An American lawyer arrived in a new land, but he called it his home.

The whole book reads like a novel. It's a fabulous history of civil rights in the United States that runs parallel to Marshall's work to create a constitution for Kenya. I absolutely love it.
Posted by Alfred Brophy at 4:48 PM No comments:

The (Not) Silent Slave

Been absurdly busy getting settled in lovely Chapel Hill. This week I had the pleasure of riding a bus home from work (and it's free, no less!); haven't been able to do that since I left Honolulu a few years ago. And I'm getting used to this most friendly town--what an unexpected pleasure to run into an old friend and now colleague at the Weaver Street Market at lunch the other day. And once I get a little more settled I hope to talk some about my "new urbanist" experience. But right now I have something else to talk about--silence and slaves....

So I understand that Silent Sam's a key monument on the UNC campus. I'm looking forward to spending a lot of time around his statue and elsewhere on the campus. However, these days I'm interested in other antebellum (or maybe in the case of Mr. Sam, bellum) characters who are often silent, though perhaps not quite so silent as Sam: slaves in southern literature. One piece of University, Court, and Slave looks to the ways that slaves are silenced in court--they're rarely permitted to testify. I'm interested in this because it seems such an obvious corruption of seeking truth--but there's a larger purpose that's served by the silence.

But what about slaves who speak in southern literature? We hear a lot from Uncle Tom. And in some of the southern responses we hear from slaves as well--like Mary Eastman's Aunt Phillis' Cabin. But what about Beverly Tucker's obscure novel George Balcombe? The last line of the novel comes from a slave, who testifies to the love of Mr. Balcombe: "We been all mighty willing, sir, to have Mass' George for master." Wow--putting words of testimony to Mr. Balcombe into the mouths of the enslaved. Mighty interesting stuff--monuments and slaves who speak intermittently.
Posted by Alfred Brophy at 4:16 PM No comments: