Guest post by George Smart, who shares my passion for mid-century modern architecture. He recently made a pilgrimage to Fallingwater. 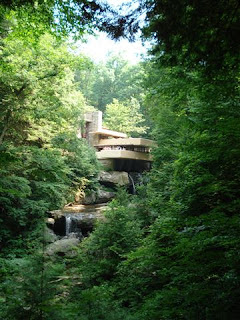 This extraordinary house, also known as the Edgar J. Kaufmann Sr. Residence, was designed by Frank Lloyd Wright in 1935. It was built partly over a waterfall for the Kaufmann family of Pittsburgh.

The house is world-famous for its connection to nature. The fireplace hearth in the living room is composed of site boulders, and the stream can be heard throughout the house.

Via a bridge and covered walkway, above the house is a garage, servants' quarters, and a guest bedroom--now the Fallingwater administrative offices. As of summer 2006, over 4 million people have visited since it opened as a museum in the 1960s. In December, celebrity architecture enthusiast Brad Pitt and his wife Angelina Jolie took a private tour and added their names to the list. 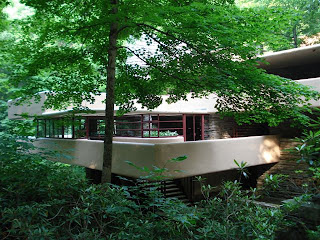 My name isn't as famous as Brad Pitt's, but I did get a fairly private tour: eight people for about 2.5 hours first thing in the morning. I had seen Fallingwater in pictures for decades and even viewed the 3D virtual model. But nothing compares to seeing this masterpiece in person. From its stark modern appearance and use of materials, one would never guess it was a house designed in the 1930s. Frank Lloyd Wright wasn't just ahead of his time, he was way way way ahead. Geniuses don't always make good businessmen, however, and one can read many biographies of his economic and professional rises and falls. 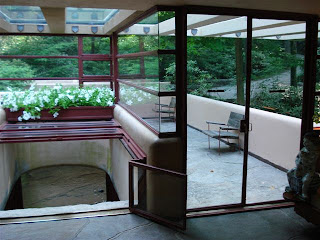 There are many types of tours, all guided: Some let you take pictures, others don't. Some are very short, some last half a day. If you're going in summer, go early. The top levels of the house take intese direct hits of sunlight that get quite hot mid to late day. Flights to Pittsburg on USAir take two hours and run $150-$250. Stay in local Donegal, Pa. (19 miles away) the night before so you can get the early morning tour.