More advocates on the Hill 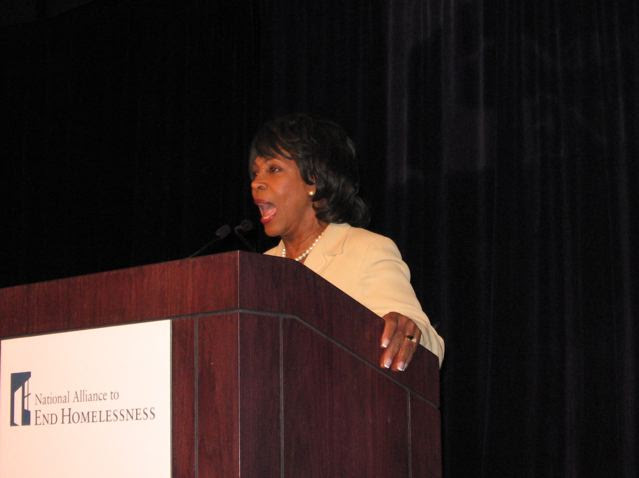 Rep. Waters of the 35th District of California

The homelessness conference ended today with a luncheon that included remarks by Sen. Jack Reed of Rhode Island and Rep. Maxine Waters of California.

Sen. Reed is co-sponsor, with Sen. Burr of North Carolina, of the proposed Services to End Long-Term Homelessness Act. This piece of legislation is critically needed in order to make "housing first" programs work. As Sen. Reed said, "We all understand that it's one thing to have shelter, but without supportive services, people can't effectively use that shelter." He also spoke to the need for legislation to prevent homelessness, encouraging those communities that have created 10-year plans. "We want to reward communities that are taking charge of their programs, that actually have a program to end homelessness. We want to streamline the process for you who are doing that."

Rep. Walters was a little late in arriving because she had to be present for a vote, but the audience found her well worth the wait. She's the chair of the Housing and Community Opportunity subcommittee of the Financial Services committee. With her city of Los Angeles "compet[ing] for the dubious distinction of the homeless capital of the nation," with 80,000 people homeless on a given night, she has a great deal invested in this issue. Echoing Rep. Frank, she said, "It's time to get the federal government back in the affordable housing creation business." She's on board with Rep. Frank in proposing HR 2895, the National Affordable Housing Trust Fund Act of 2007. She is also interested in issues of coordination and collaboration: how does the Section 8 voucher program work to combat homelessness? What is the real impact of the Community Development Block Grants on homelessness?

And she wants to draw the connections between homelessness and more visible issues such as health and education. She said her subcommittee will also hold a hearing on the impact of housing on these areas. "As one of those who has long championed the cause of HIV/AIDS," she said, "I'm well aware of the data linking access to affordable housing to improved T-cell counts. I would like to make sure more members [of the House] know these and other important facts, including the importance of housing stability to school performance, so they can understand that this is truly an investment in people."

Email ThisBlogThis!Share to TwitterShare to FacebookShare to Pinterest
Labels: Homelessness