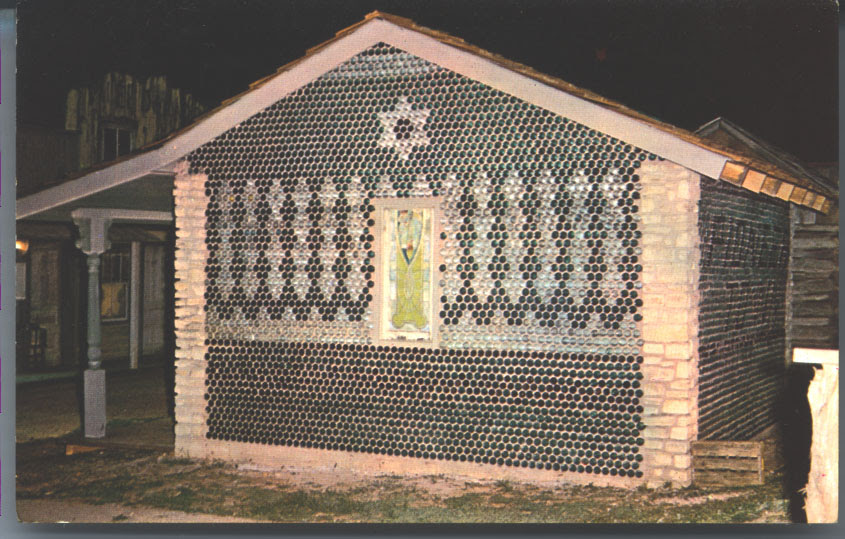 The Bottle House, Pioneertown, Wimberley, Texas
"Built of over 9500 sodawater bottles and lighted from the inside, it glows brilliantly at night."

"Small miracles" department: Half of my long-lost postcard collection has been found, and a hopeful search continues. About this and other losses I once wrote,*

For reasons large and small, I've been thinking about losing things--about how much loss a person has to bear up against in the course of just one ordinary lifetime.

Like my postcard collection: two bulging file draws of them, a pictorial diary, glossy and idealized, of a well-traveled childhood. It was organized geographically. Texas loomed largest, of course: the San Antonio river walk, the Fort Worth Zoo, the Humble Building on the Houston skyline, a house made of bottles at a Wimberley dude ranch, the HemisFair.

And in other categories, the 1964 World's Fair, the White House, Niagara Falls. Novelty postcards, such as a copper-coated one from Utah to which was attached a tiny bag of salt from the Great Salt Lake. Antique cards bought in Jefferson, bearing traces of the lives, and losses, of strangers.

Cards sent to me from places I thought I might never see, some of which I still may not: London, Paris, Jerusalem, Constantinople (to call it by its lovelier name).

There was even a postcard with my picture on it. Barely recognizable, Nancy Harrison and I sat on the pier in a long shot of the lake at Camp Nottawa. We were in Camp Fire uniforms. Were bathing suits unsuitable on fourth grade girls? This was one of a handful of local cards that for a while could be bought at the Dairy Queen, though I noticed that they never seemed to disappear.

All are lost now.

A poem by Elizabeth Bishop, which I have memorized so as not to lose, is some consolation.

The art of losing isn't hard to master;
so many things seem filled with the intent
to be lost that their loss is no disaster.
. . . 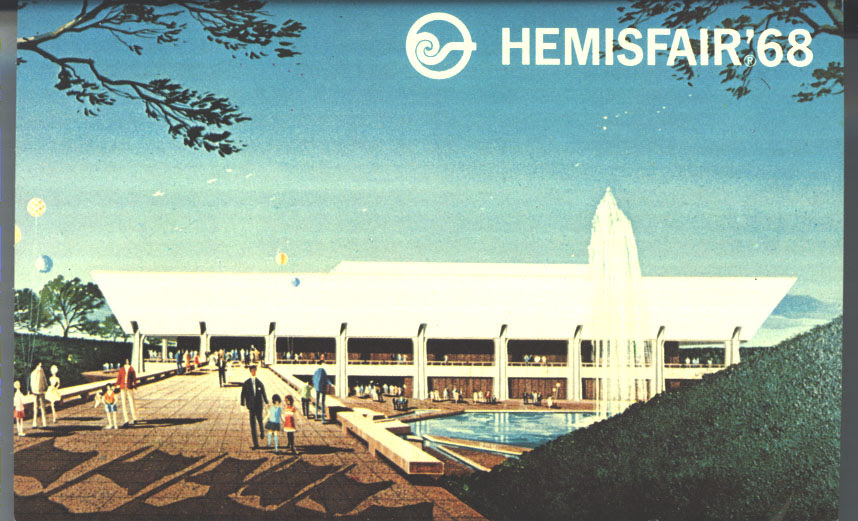 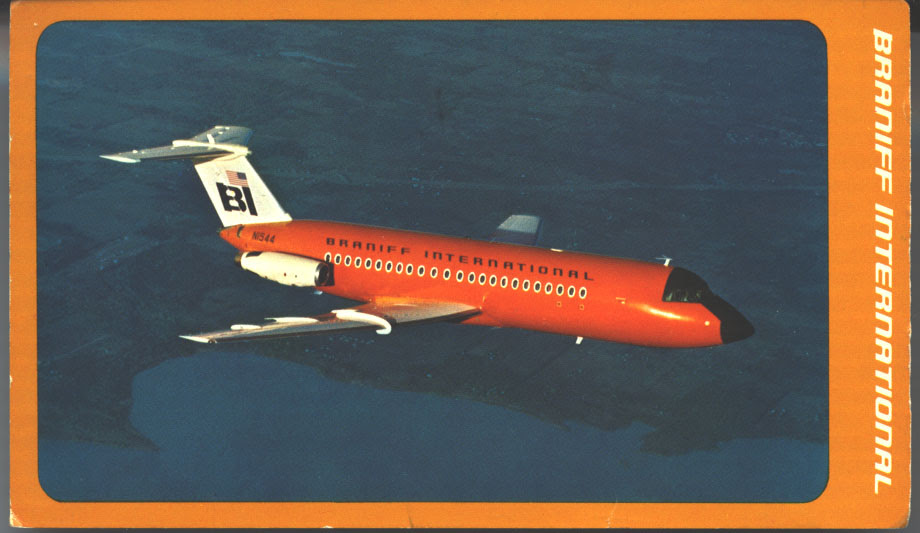 The End of the Plain Plane
"You can fly with our airline seven times and never fly the same color airplane twice." High Fashion Quick Change
"Braniff International airline hostesses are outfitted in a couture collection by Emilio Pucci. They can make four changes in a single flight." 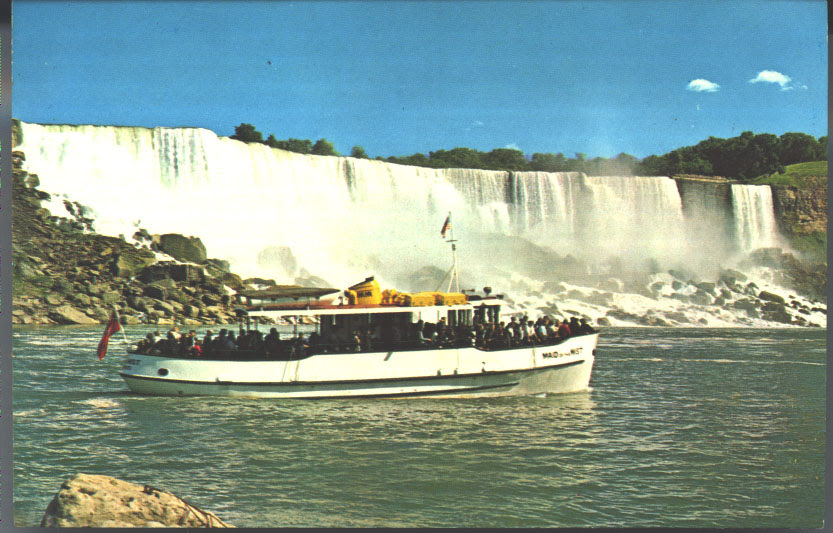 Seeing Niagara Falls from "Maid of the Mist"
"The voyagers are swathed in oilskins as a defense from the saturating spray and the spectacle of the mighty volume of water, passing over the precipice 160 feet above, to fall in thunder on the rocks below, is as magnificent as it is impressive." 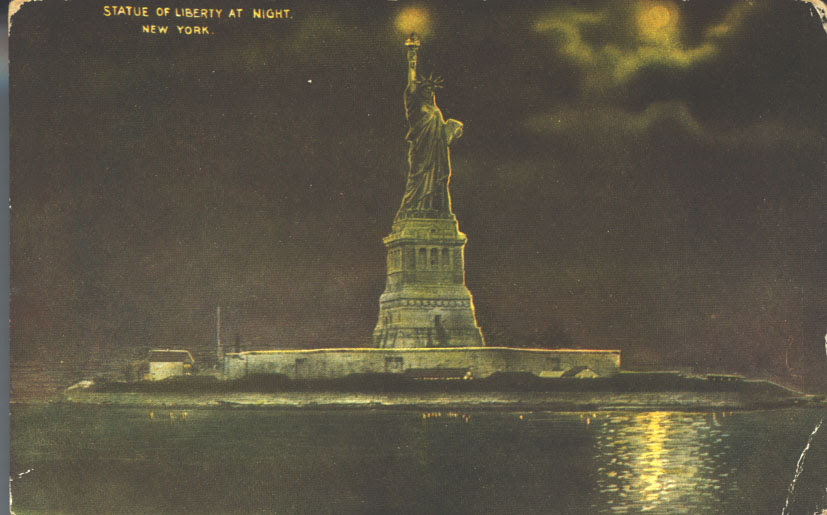 Statue of Liberty at Night
"Standing on Bedloe's Island, 1 3/4 miles from the Battery, it symbolizes 'Liberty Enlightening the World.'" 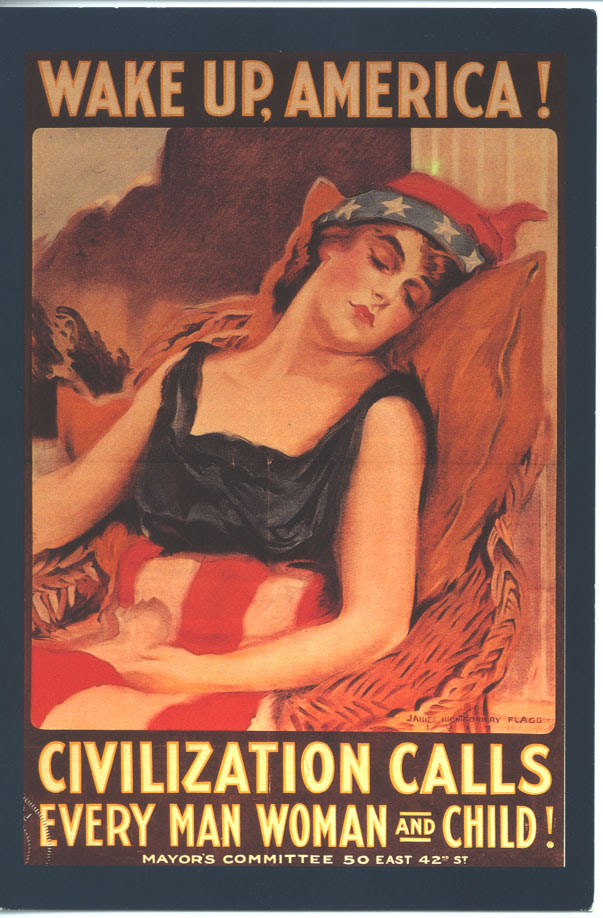