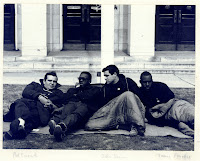 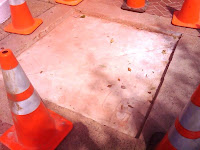 What's been most remarkable lately, as town employees have worked to remove one section of the brick pavers and ready the space for the installation, has been an archaeological discovery. On the concrete base that was poured to stabilize the brick pavers when they were laid, someone etched a swastika. (Click on the photo for an enlarged view; it's in the lower corner.) Emily Cameron, landscape architect for the town, puts it beautifully in perspective: "We thought it was worth noting that we have removed an historic symbol of hate and racial prejudice that had been hidden at the foot of our nation’s flag to replace it with a marker to commemorate the struggle for equality, justice, and peace."
Posted by Sally at 10:30 AM