Today is Tomato Day at the Carrboro Farmers Market. This essay was published in the "Tomato" issue of the Carrboro Free Press on July 8, 2009.

Overheard at the Carrboro Farmer’s Market, mother to silent daughter: “The ugliest tomatoes are actually the ones that taste the best.” I wondered if this one-way conversation would take the obvious metaphorical turn, but it stayed straight on message. “Mommy is very picky about her tomatoes,” she continued as she examined a promising German Johnson.

Except for recognizing the inherent superiority of the home-grown varieties, I can’t claim to have ever been that picky about my tomatoes. Since I grew up in rural East Texas, my husband, bred in Charlotte, finds this to be curious.

Trips to the farmer’s market with Paul in high summer are quests for the ugliest, tastiest tomatoes. In reaction to the acidy Burpee’s Big Boys that he remembers from his father’s backyard garden, he’s after sweetness, with enough texture to stand up to the heat of the stovetop. Pink Girls, Cherokee Purples, all manner of lyrical names will join the reliable German Johnsons in soups and gumbos and biryanis and jamablayas of his own invention.

Assembling the tomatoes with other seasonal picks from the market, he’ll jump from cookbook to internet recipe to suggestions from his “tweeple” till he finds the magical combination of ingredients. He’ll put our son Tucker to work at the chopping board, encouraging all kinds of proper habits, not to mention the love of a good meal carefully prepared.

At 16, Tucker is ripe for embarrassment, though that’s not my aim in sharing the story behind one of his best works of art. Preschool age being the high point of abstract expressionism for so many, the daycare years brought out a talent in Tucker that he has since let languish.

On construction paper washed in pink he painted a fury of reds and greens, with a red center of gravity, random spokes of the red and green contributing energy and intensity. This creation of our young Jackson Pollock ended up on the coffee table next to a New York Times Sunday Magazine. The magazine happened to have a picture of a tomato splattered on its otherwise stark white cover. Tucker looked at the two, pointed to his own, and proclaimed, “Tomato!”

The topic of the cover story was politics: the Gingrich Revolution of 1994, symbolized by an iconic image of the tomato as hand grenade. Out of the mouths of babes, though. With that pleasurable cry of discovery—Tomato!—political symbol was reduced to its literal essence, while the abstract was translated into a piercing reality, a bright red tomato so juicy it could not be contained. Home grown, to be sure. 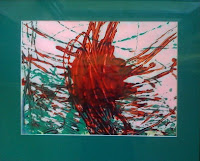