Babeling back to the future

Fascinated with the pictures, but frustrated with the text, I turned, naturally, to Babelfish to tell me what was up with this Italian retrofuture site.* Ah, now we're in business!

"The Future Approval of the Past" consists of thirty amazing pages of futures that never were (a favorite subject of mine). On this first page, we learn that "the first great technological visionario" was "Norman Beautiful Geddes."

On another, some great scenes of the Futuro house (see one yourself on Hatteras). Scroll to the bottom, past Buckminster Fuller's Dymaxion House and the Disney Monsanto House, etc. I'm not sure, but the text seems to want to imagine a future in which the very roof of the house would be unnecessary, for wind currents would be adjusted to keep untoward elements out.

Then there's the original EPCOT Center ("we are convinced that it will not be enough to cure the old evils of the old cities. We think that there is need to build up from the null one, on earth vergine, a special type of community"). EPCOT's Horizons pavilion has been destroyed. And Disney's Tomorrowland is almost beyond recognition now.

But what about New York City, the new New York, in an imagined year 2000, as much like the old as the old was like a Moroccan village? The Empire State, the UN, Rockefeller Center, all "pulled down." "Cancelled" are "the Fifth Avenue, Park Avenue, Madison Avenue, it eliminates you the beautifulst bridges on the Hudson and the East River, to their place raised fantascientifiche towers of three hundred plans, automatic roads, objects that I did not succeed to understand, between which flew but woman-rocket and man-rocket."

What a travesty! (Except for the personal rockets.) This would be like Le Corbusier's Paris. 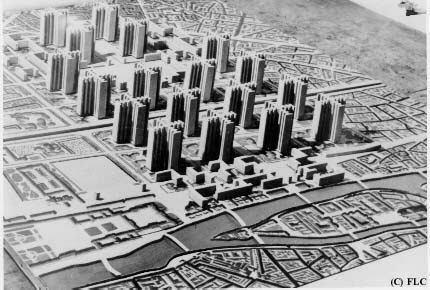 Come to think of it, I'm not sure which is more alienating--the Italian version of this web site or the one in mangled English. The future that has become our present reality is light years shy of any of these "utopias." Our reality has little to recommend itself, and in fundamental ways it comes from the same place ("EPCOT will always exhibit to the world the ingenuity and the imagination of the free enterprise American"), but we are, for better or worse, still basically down to earth.