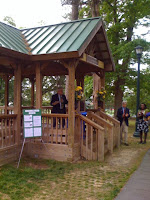 Yesterday many members of the community gathered to remember Rebecca Clark and to dedicate the gazebo in the Old Chapel Hill Cemetery to her memory. Speakers included former Town Council member Jim Merritt, Mayor Pro Tem Jim Ward, and me. I was asked to speak in my role as chair of the Council naming committee--to talk a little about that process. Here are my remarks.

The Town Council does indeed have a process for naming public structures and facilities after people. To have something named after you by the town is a great honor; it’s not something we do lightly. The first requirement is that the person be no longer living. There are good reasons for that policy, but there’s also a downside: Rebecca Clark is not here with us today to see this honor bestowed upon her.

I think of that old song by the Carter Family,

Give me the roses while I live
Trying to cheer me on.
Useless are flowers that you give
After the soul is gone.

And certainly her presence is still felt and will be felt for a long time to come, through the memory established here with this gazebo but also in the hearts and minds of so many of us who can still remember vividly long phone conversations with her, in which she had something important to explain, something complicated with deep roots, going way back, are you with me? She wanted to be sure you know how some seemingly intractable problem had gotten to be that way in the first place, are you with me? Something was going on, going wrong, and it needed to be fixed.

We’re still trying to fix it all, Ms. Clark. We’re with you—and we’re grateful that you were with us and that you stuck with us and worked with us for so long.