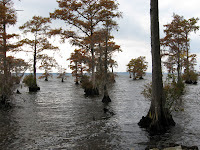 While Al has been keeping GreeneSpace alive, for which I'm very grateful, I've been back at work on my essay on Thomas Ruffin and State v. Mann as a follow-up to last fall's symposium. Lately that project has taken me back to the archives. As anyone who has done this sort of thing knows, it's easy to get lost in the archives, to go down trails you never intended just because they are interesting.

One of the jurors who heard John Mann's case in Chowan County in the fall of 1829 was Thomas I. Brownrigg. He was from a wealthy Irish Protestant family that established the first commercial fishing operation in provincial North Carolina, on the Chowan River just above Edenton. By his day, the estate that his grandfather Richard Brownrigg had established consisted of some 1,400 acres. Thomas' half-sister Priscilla Brownrigg was married to the solicitor (the prosecutor) bringing the case against Mann, John L. Bailey. (So much for conflict of interest.)

I rode over to Wingfield . . . The dear old place, my ancestors' home, around which cluster all the fond and proud associations of my family, is as much altered from the paradise it once was as a skeleton is different from the full and rounded form of youth and health and beauty. I rode down to the rear of the garden and took a long and wistful view of the most beautiful river I have ever seen; its glittering waters looked just as they did forty years ago. And the cypress trees with their broad bases stood out in the water, isolated, only awaiting their time to fall prostrate like others on the strand . . . the waves beating their solemn cadence on the lonely shore and the sighing of the wind through the cedars made symphony with my troubled heart. I felt humbled as in the presence of the dead; I tried to conjure up the long ago, when gay and festive and merrie throng gathered on the lawn, or made the house echo with song and dance and music's voluptuous swell. I tried to imagine where Father poured into your willing ear the words of love and plighted faith, but it would not do. In spite of me I was depressed beyond measure, and there the scarred and ruined house stared me in the face like an ugly demon. I bade silent farewell to the place and rode away.

Accompanying this paragraph was a note saying the house had been occupied in 1863 by the Buffaloes, "a band of traitorous Southerners."

What happened? It appears that during the Civil War there were two Union infantry regiments organized in eastern North Carolina out of white North Carolinians. According to Professor Donald E. Collins, they had their reasons:

Why did 1,300 men from the counties of Eastern North Carolina go against their native state and join the Union army? The answer is complex and is not simply loyalty to the United States and/or opposition to slavery. The nucleus of the First and Second North Carolina regiments, those who entered in the first enthusiastic burst of recruiting, were anti-slavery men who opposed secession. That, however, is even too simple an explanation. As pointed out by historian Wayne K. Durrill in his book A War of Another Kind, in describing the war in Washington County [See: Tidbits], it was a form of class warfare of haves versus have-nots -- the poor whites and small yeoman farmers who opposed and acted against their wealthy slave holding planter neighbors. Such men rushed to join a Union army that would help them punish the secessionist planter class.

The earliest North Carolina Union soldiers were "carried away with the idea that when they became soldiers they would be licensed to shoot down indiscriminately every disloyal citizen to the government they could find, and appropriate all of the property belonging to such persons to their own comfort, or to the benefit of the Government. " These Unionists were less anti-slavery than pro-white labor. They wished to end slavery as the first step toward deporting Blacks from the country -- to the benefit of the white working man.

These soldiers were called Home Guards. Their role was not to involve leaving the state. Rather, they were to cooperate with northern soldiers, perhaps serving as scouts or doing reconnaissance. "Perhaps the most hazardous duty involved recruiting forays into the no-man's land of the Albemarle Sound and Roanoke/Chowan rivers region where they were regularly harassed by small bands of Confederate guerilas."

But the company that took over Wingfield was no credit to the Union. According to William Mallison in The Civil War on the Outer Banks, after being turned into a post of the Union army, Wingfield went from bad to worse.

It became a center of “fugitive negroes, lawless white men, traitors and deserters from the Confederate army. Their leader, Captain Jack Fairless, a deserter, and his men “pillaged, plundered, burned, and decoyed off slaves in their forays into Chowan . . . Bertie, Perquimans, Hertford, and Gates Counties.”

Capt. Fairless was fatally shot by one of his own drunken men. A fierce battle then took place between the remaining Union men and some Confederates, the Union side "armed with an antique cannon stolen from Edenton." The Confederates eventually prevailed, but Wingfield was destroyed.