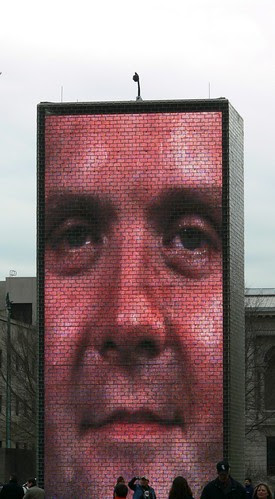 Security cameras that were inartfully placed on top of Jaume Plensa's Crown Fountain in Chicago's Millennium Park were brought down by a couple of blogging "architecture enthusiasts." Photo-blogger Devyn Caldwell and his partner Mike Doyle happened to notice them on Sunday, December 17. "It looks like a Martian sitting there with a little antenna on his head," said Doyle. Caldwell got the attention of Tribune architecture critic Blair Kamin; interviews, investigation, and more blogging followed; on Monday night, December 18, the cameras were felled.

More in today's Times, which reports that Plensa was not informed about the cameras but "was pleased to learn that they had been removed." (Local readers will remember that Plensa was the artist proposed for the recently failed public art project on Fayetteville Street in Raleigh.)

Even with cameras gone, there's something wrong with this picture. The objection was not to the cameras as such: it was the "Orwellian" conjunction of the serious surveillance camera and the playful faces of actual Chicagoans that rankled. The offense was not to the public: it was to art itself. Cameras are all over Chicago. Eight others keep watch over Millennium Park alone. Indeed we learn in the Times that "[t]he cameras were meant to stay atop the towers for only a few months until a permanent fixture could be built nearby." Presumably those fixtures will be built; the friendly faces will bear their "third eyes" more subtly and from oblique angles.

Doesn't it remind you of an old joke? The one about how we know what the lady is: now we are just establishing the price.