Not so set in stone

LeRae Umfleet, principal researcher for the report of the 1898 Wilmington Race Riot Commission, was guest this morning on WNCU's "Legal Eagle" show with Irving Joyner. She noted that the public monuments scattered around the city in honor of the leaders of the Confederacy were erected in direct response to that event, the only overthrow of a duly elected government in our country's history.

Indeed the memorials in Wilmington as well as in Raleigh, as Catherine Bishir has observed, played a crucial role in solidifying the history of the post-Reconstruction period. The lesson that 20th century schoolchildren would learn, punctuated by these towering monuments, was that a fearful threat of "Negro domination" had been put down--with violence to be sure, and that was unfortunate--so that white rule could be restored and the proper order of things reinstated. “With competing visions of the state’s past, present, and future all but silenced in official discourse, [North Carolina’s] leaders shared a powerful sense that both in politics and in the culture at large, matters had been returned to their correct alignment,” Bishir writes in Fitz Brundage's collection Where These Memories Grow. The state’s history was reinterpreted as a tapestry of “old family heritage, Anglo-Saxon supremacy, and military and political heroism,” all with an aim toward a “rebirth of southern progress and leadership in the nation.” 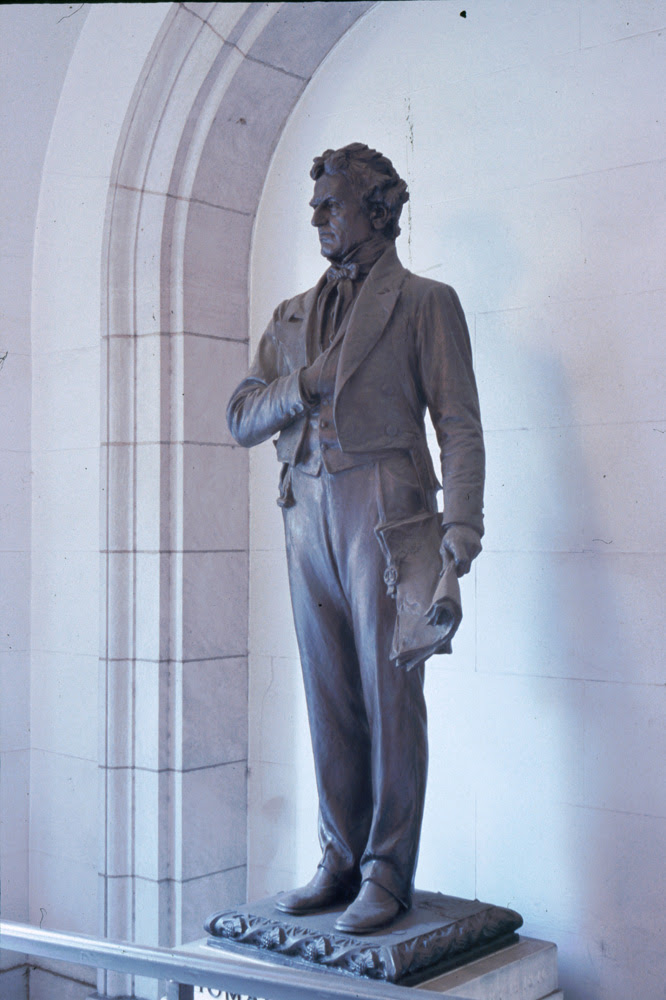 Judge Thomas Ruffin's statue is one of several monuments in Raleigh that came out of this historical moment of renewed pride and reflection. In dedicating the statue, J. Crawfurd Biggs, president of the North Carolina Bar Association, spoke for the state's ruling class when he emphasized the importance of placing the likenesses of great historical figures on public display:

We have not exerted ourselves to stimulate a healthy State pride, by preserving in marble and bronze the records of the past, by erecting statues and suitable memorials to commemorate the name and fame of the great men whose services have enriched and glorified the traditions of our Commonwealth. It is from the experience of the past that we draw inspiration for the future, and any act which emblazons in imperishable form the great deeds of our ancestors should be regarded with favor.

Across the country in this period, "Public monuments helped to celebrate and cement [a] progressive narrative of national history," writes Kirk Savage--a narrative that "instill[ed] a sense of historical closure. Memorials to heroes and events were not meant to revive old struggles and debates but to put them to rest—to show how great men and their deeds had made the nation better and stronger. Commemoration was a process of condensing the moral lessons of history and fixing them in place for all time; this required that the object of commemoration be understood as a completed stage of history, safely nestled in a sealed-off past."

But"[t]his logic of commemoration drastically shriveled history," Savage continues. "Women, nonwhites, laborers, and others who did not advance the master narrative of progress defined by a white male elite had little place in the commemorative scheme, except perhaps as the occasional foil by which heroism could be better displayed. This kind of commemoration sought to purify the past of any continuing conflict that might disturb the carefully crafted national narrative."

The success of just such "purification" of the past is what makes the Wilmington report so important for North Carolinians. Close to 500 pages in hard copy, it documents in fact after stubborn fact how "[e]very facet of African American life was affected by the events of 1898" (248). With other recent efforts to come to terms with Reconstruction--Thomas C. Holt's 2004 speech at UNC comes to mind--the work of LeRae Umfleet and the Wilmington Race Riot Commission un-fixes the past in productive ways. For as Savage puts it, "The history of monuments themselves is no more closed than the history they commemorate."
Posted by Sally at 7:51 PM