See my Chapel Hill Town Council colleague Mark Kleinschmidt's two nice posts about significant actions we took Monday night: becoming perhaps the first community in the nation to create a comprehensive master plan for public art; and giving the name Peace and Justice Plaza to the important civic space in front of the old Post Office on Franklin Street.

With Mark I served on the steering committee to develop the art master plan. Consultant Gail Goodwin served us well, enabling us to imagine all sorts of ways in which art could be worked into the very fabric of the town--and setting us up with a blueprint from which, over time, we can make it happen. 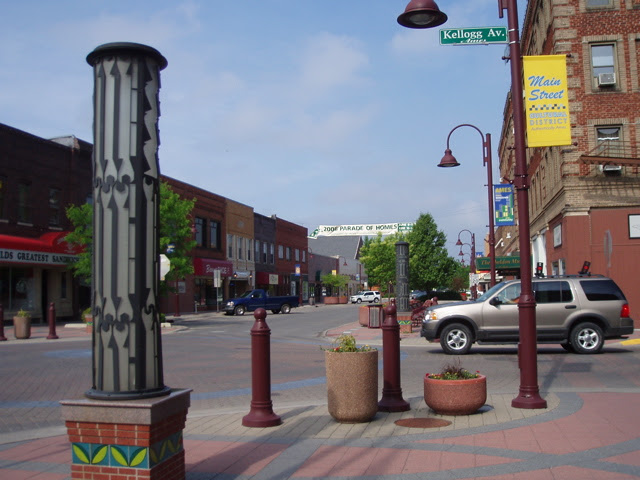 Ames, Iowa: downtown streetscape with sculptural light fixtures. Ames has had a public art program since 1990--the first community in the country to do so.

On the plaza, I chaired the council naming subcommittee's discussion of recommendations that came out of a request. We were asked to name the space in front of the old Post office, the traditional site for protests and vigils, for Joe and Lucy Straley and Charlotte Adams, three people who spent countless hours over many years there making their voices heard. The issue the Council faced was whether to name the space Straley-Adams Plaza (or some such) or to name it, as we ultimately did, for ideals that their work stood for, while also having them be honored by name at the site with a plaque: a plaque that would allow for honoring other citizens at future times. Good arguments could be made for either, but I believe we made the right decision. I've been thinking in new ways about the very idea of a governmental body naming anything after any individual ever since reading a fascinating article by Ann Bartow of Feminist Law Professors. In "Trademarks of Privilege: Naming Rights and the Physical Public Domain" (forthcoming, UC Davis Law Review), she essentially questions whether the government should ever be in the business of naming:

This paper critiques the branding and labeling of the physical public domain with the names of corporations, commercial products, and individuals. It suggests there are under-recognized public policy conflicts between the naming policies and practices of political subdivisions, trademark law, and right of publicity doctrines. It further argues that naming acts as currently constituted are often undemocratic and unfair, constitute illegitimate private appropriation of public assets, and constitute a limited form of compelled speech. It concludes by considering alternative mechanisms by which the names of public facilities could be chosen.

Bartow's suspicions are aligned with those Sanford Levinson, who argues that, through their authority to name facilities and narrate events, government bodies slip from hosting a "marketplace of ideas" into engaging in direct (but not necessarily democratic) political discourse. Although I believe our Council is as responsive as we can be to the requests of our constituents, and that we can and do work within processes that are democratic, I see what the danger is. Accordingly, I think we need to treat naming requests carefully.

I'm very happy that we will honor Joe and Lucy Straley and Charlotte Adams by commemorating their contributions to the community--at Peace and Justice Plaza.