Louise Stone, longtime Chapel Hillian and wife of Chuck Stone, isn't very happy with the Unsung Founders memorial. Reprinting her letter, Ruby Sinreich confesses that she isn't either. The "enormous contributions of black workers" are "midgetized," Ms. Stone says. And the small figures have no faces, Ruby says (that's not exactly true, but you do have to look hard for them). They're dwarfed by a shiny granite tablet that, because it's round and black, looks a bit too much like another civil rights memorial, Ms. Stone points out: it isn't even original. 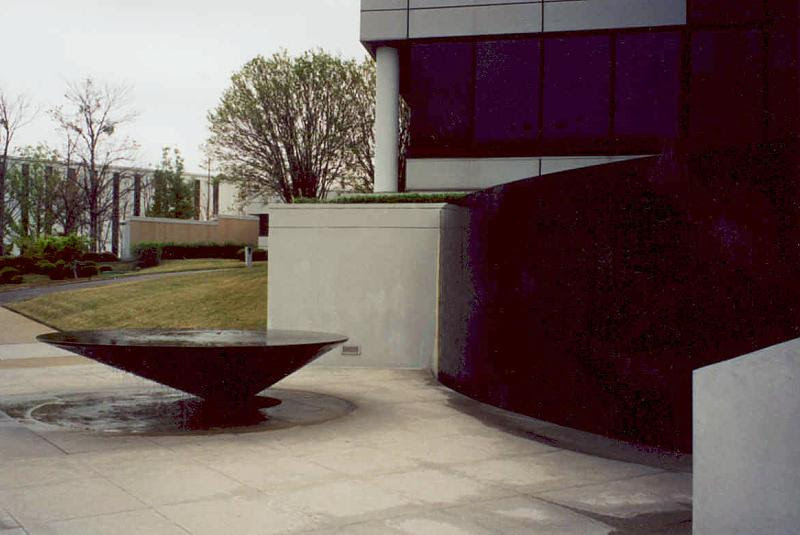 She's right about that much. Maya Lin's Civil Rights Memorial in Montgomery also incorporates a circular piece of black granite. Water "rolls like justice" across the names and dates of key players and events in the movement. Nearby is the "Wall of Tolerance," where you too can have your name placed (in exchange for a donation to the Southern Poverty Law Center). Click on the "online" box on the right side of this page and you can experience some of this very textual (and tactile) memorial for yourself.

"Why do contemporary monuments talk so much?" asked Dell Upton in a talk at an architectural history conference at the Savannah College of Art and Design in 2003. We are living in a particularly active period for the creation of public memorials, he noted. Reflecting the times we live in, they are typically not statues of "great men" on pedestals; rather, they celebrate the collective efforts or sacrifices of individuals (the Oklahoma City memorial being one example), and they tend to tell multiple stories, not just one story.

The Unsung Founders memorial is in this contemporary tradition. Not as "noisy" as the one in Montgomery, still its attention is on the collective (the circle itself symbolizing a wholeness made of multiple parts), the many enslaved and free blacks whose labor built the university. In this light, the difficulty of reading the faces on the figures holding up the granite tabletop becomes meaningful. In her dedicatory remarks last Saturday, Dean Bernadette Gray-Little reminded us of the poverty of genealogy that African Americans suffer: these are faces that can't be clearly drawn because their names are not all known.

Are they about to be crushed by the weight of the stone? wonders Eric Muller. Time will tell, but it looks doubtful. It's not a bad question, though. If the possibility occurs to someone, then it seems to me that the message of their sacrifice has gotten through. What comes through to me, as I have said, is their strength.

The only other period of American history that has rivaled our own for the erection of public monuments, according to Upton, is the turn of the last century. Monuments were very different then; they tended to reflect singular narratives of the dominant culture: like that of the Lost Cause, for example. Silent Sam is a product of that time. Although he has his back to the Unsung Founders (his wary eye fixed northward), it's not hard to imagine them in conversation. What goes around comes around.
Posted by Sally at 1:24 PM