After a deadly flirtation with Florida, on August 28 Katrina whipped herself up into a Category 5 storm heading for the Louisiana barrier islands.

In Kate Chopin's 1899 novel The Awakening (which I just reread online courtesy Documenting the American South), August 28 is the date on which, on one of those islands, Grand Isle, Edna Pelletier begins her journey down the road of self-discovery that will become both her salvation and her undoing. Madame Ratignolle's piano-playing stirs her to a frenzy; she can't sleep; the whole night becomes "like a night in a dream." To her admirer and possible lover Robert she says, "There must be spirits abroad tonight."

Indeed, he responds: "On the twenty-eighth of August, at the hour of midnight, and if the moon is shining - the moon must be shining - a spirit that has haunted these shores for ages rises up from the Gulf. With its own penetrating vision the spirit seeks some one mortal worthy to hold him company, worthy of being exalted for a few hours into realms of the semi-celestials. His search has always hitherto been fruitless, and he has sunk back, disheartened, into the sea. But to-night he found Mrs. Pontellier."

Mrs. Pontellier is not, in the end, strong enough for the prevailing winds. But her decision to end her life by walking out into the majestic sea has to be read, on its own terms, as an affirmation. "The voice of the sea speaks to the soul. The touch of the sea is sensuous, enfolding the body in its soft, close embrace."

Southern writers and readers often talk about a "sense of place"--a notion that, while it can seem trite, has certain meaning. It has to do with the concrete and intimate relationship of geography to time and narrative. Among other and surely greater losses generated by Katrina, we should not forget the permanent destruction of so much of the physical environment.

An essay published earlier this summer, before the storm, explores the sense of place in Grand Isle, Louisiana.

Residents’ landscapes convey ideas of uniqueness and fragility. Even those respondents who do not live permanently on the island talk about how the island is fragile. Respondents’ narratives of place are framed in terms of the island being unique socially and environmentally. The island’s unique quality is not separate from its fragility. As the land erodes and changes so do the cultural aspects of the island. Traditional forms of work change and it is unknown exactly what will replace it. Neither fishing nor the oil industry can be counted on to sustain life. Development and an influx of upper middle class outsiders also change landscapes. There is a sense of cultural fragility as well as fragility of the natural environment.

While the landscapes of these residents are shaped by the certainty of erosion and the prospect of the ‘big’ hurricane, the framing of their environment in terms of fragility also contains elements of faith that go hand in hand with the land - they will hold on and sustain community while never abandoning the idea of moving ‘up the bayou’. The fragility of place appears to accentuate the unique qualities conferred upon place.

Grand Isle appears to have fared relatively well in Katrina, better than the Chandeleur Islands to the east. The before-and-after photos there are astonishing. 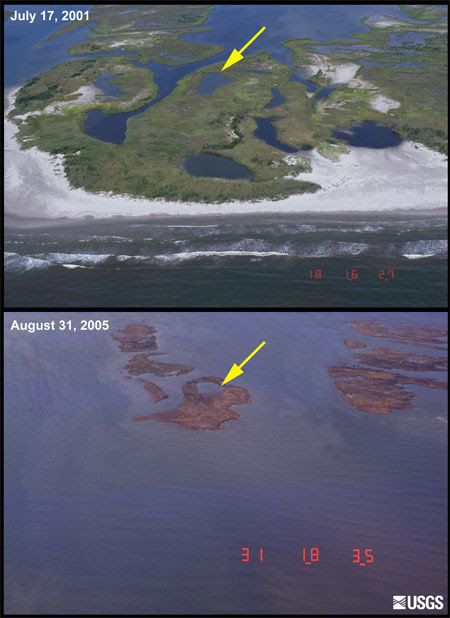